We've been working hard on the Game Pie Advance (GPA) project (among other things).  Please check that out at http://gamepieadvance.com/.  An example GPA unit running CFC2English is shown to the right.

It's a Raspberry Pi emulation system that fits inside of a GBA shell.

In some other testing, I realized that I had been supplying a wrong mismatch of patched Cardfighter 2 data.  I hope that I've fixed it.  If you look at the links to the right, you should be able to Download CFC2English 1-25-2017.

This new patch incorporates raohmaru's work with the proper (previous) CFC2English release.  Also see the forum thread about this. 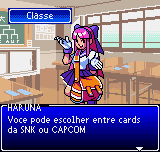 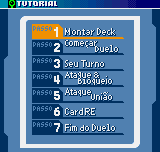 I've done you guys a disservice by not posting about this sooner.  In fact, I knew about this translation effort years ago, but I actually didn't know it was released to the public until today.

In 2010 and 2011, I helped a guy known as Maggot translate CFC2 to Portuguese.  Recently, I have been in contact with someone wanting to translate CFC2 to French.  This process reminded me to get in touch with Maggot, and he showed me where CFC2Portuguese has been all this time.

So, there you have it.  You could have been playing CFC2 in Português for the past 3 years.  Now you know.
Posted by Flavor at 5:46 PM 1 comment:

Member raohmaru over at the Freeplay Tech. Forum has posted a new patch for CFC2English. Here's a little excerpt from his post about the patch.


The texts of the abilities of all cards were fixed, now they say more accurately what the effect does. Also, I've aligned the items in the Dictionary menu, and rewritten certain rules to correct mistakes and make them more understandable (e.g., you can only backup once per turn, whereas current rules says twice).

You can find the patch file and some discussion over here: http://forum.freeplaytech.com/thread-5-post-2286.html#pid2286


Quickly, in other news, the NGPC flash cart development kits have been doing well. If you're interested, check out www.FlashMasta.com and contact me through that site.
Posted by Flavor at 7:55 AM 1 comment: 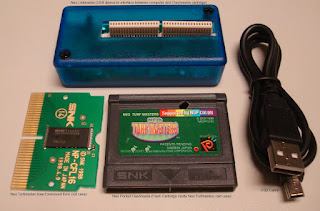 In addition, the forum is open to pretty much anything NGPC related. If you're looking to interact with other NGPC guys, check it out.

One thing being discussed there is this Flashmasta/Linkmasta that's been in production. The picture shown here is taken from the most recent post at the Neo Geo Pocket flash cart website.

If you're looking to play Card Fighters Clash 2 in English on the actual hardware, you'll want the Flashmasta and Linkmasta.
Posted by Flavor at 2:49 PM No comments:

There have been some developments in the Neo Geo Pocket community lately. These aren't directly related to Card Fighters' Clash 2, but you can make a connection as to how they may go together.


First of all, as you may see from the video, there is a new USB Linker in the works. This will allow people that have the old Bung carts to use them on their modern computers (without needing a parallel port). It can also interface with official game carts to do things like backup and restore savegame data. If you're interested in this, there's a discussion about it over at the Neo-Geo.com forum.

There is also a related project to create a new Neo Geo Pocket flash cart. You can find a bit more about that on Gerry's Neo Geo Pocket project page.

Back In The Game: Card Fighters Project

Some of you guys might remember the Card Fighters Project (or simply cardfighterproject.com), but it may be new to others. Basically, Tehcno created a way for everyone to play Card Fighters' Clash (1, 2, and DS) in real life. He painstakingly created graphics for each and every card in the series in a way that you can print them to have your own physical set of cards. It was a great resource, but unfortunately his hosting expired and the domain almost went with it.

Well, after a bit of a hiatus, http://www.cardfighterproject.com/ is back in the game. I think it's a great resource, and I'm glad to have it online again. What are you waiting for? Go buy some color printer cartridges and call your friends for a night of classic NGP gaming without the need for an actual NGP.
Posted by Flavor at 11:40 AM 6 comments:

It's Been a While, Again!

I came by and decided to modernize the look of the site a bit. I hope you like it. I'm not sure it's better, but it's different/new. I added a few things. For example, you can now "Follow" this blog via the widget on the right. As I write this, I have ZERO followers. Maybe you'll be the first.

I've got some other NGPC related projects ramping up that I'm excited about. I may start posting about that and some other news soon. For now I really don't have much else to say, but I'll leave you with this...

While I was checking things out, I came across this video (among others). I thought you guys might like it. But, beware. SPOILER ALERT! The video is of YouTuber "YuRickYu" fighting the final battle of the game, and the ending storyline and in-game credits follow. If you don't want to know what happens, don't watch it.

My new best friend, NeoTurfMasta, over at NeoGeoFanClub.com recently released some pictures of the insides of his K2_VIDEO unit. This machine was used to allow Neo Geo Pocket developers (and perhaps reviewers) to play NGPC games on a TV or video capture device. Here's a direct link to his post about the SNK K2_VIDEO NGP to TV adapter.

What's more is that Turfmasta has been using this hardware to create some nice video captures of Neo Geo Pocket Color games. This is excellent, because it gives you an idea of how the stuff runs on actual hardware without having a video taken by a camera of someone playing a NGPC (like I would do). To me, though, it's much more than that. It excites me to know that hardware like this has made its way into the hands of regular (non-SNK) people. I really appreciate that Turfmasta has gone out of his way to share his collection through the pictures and videos that he's providing. I wish more collectors would follow his lead and show us some other cool NGPC development or prototype hardware/software.

I'm working with Turfmasta a bit to try to get the BIOS of the K2_VIDEO unit dumped. I don't really know if it will ultimately produce anything amazing, but I fell that it's important to share this sort of thing. If we can get it into the capable hands of people like Judge and Flubba, perhaps they can find some hidden gems in there. Otherwise, I still feel that it's important to archive such things for historical and nostalgia purposes.


Oh, did you want this post to be CFC2English related? Okay. There's a video clip Turfmasta made by video capturing CFC2English running on his K2_VIDEO unit. Thanks again to the NeoGeoFanClub guys: Turfmasta, NeoBomberman, and rarehero.
Posted by Flavor at 7:27 AM 5 comments:

The GP2X Wiz has arrived. You can check out my GP2X Wiz review over at Play-Asia-Rulez if you like. Basically, it's a smaller, lighter, cooler, and faster GP2X.


As you can see, I have been working on bringing the NGPC emulator to the Wiz. The video shows the Neo Geo Pocket Color emulator running on the GP2X Wiz. Of course, I had to play some SNK Vs. Capcom CFC2 on it. I still need to tweak some things (like stretching the screen size), but it really does work well. Check out the Wiz if you're looking for a new toy to run all kinds of emulators and homebrew games.

In other NGPC news Thor released a great new homebrew game called Gears Of Fate. I highly recommend that you try it, and, if you have a way to try it on the actual NGPC, do it. It's an amazing bit of technical achievement. If you can't run it on hardware, try NeoPop or check out this video of Gears Of Fate on the Neo Geo Pocket Color.
Posted by Flavor at 12:52 PM 5 comments:

This is just a brief note. There hasn't been anything noteworthy going on with the CFC2 translation lately, and I haven't been working on any other interesting projects. Real life is where it's at for the time being, I guess.

I did want to mention an article that I just read, though. It's an interview with Clyde Mandelin, AKA Tomato, who did the fan translation of Mother 3 (GBA). In it, he describes some of what goes into a translation, which is just like what I went through with this CFC2 translation. Give it a read. If you're here, I'd assume you'd find it interesting.

"There are basically two major parts of a ROM translation, whether it's for the SNES or any other system: the hacking part and the translating part," he explains. "First, the hacker has to locate the game's font and produce what's called a table. Using this, the hacker can then start to locate the text data."